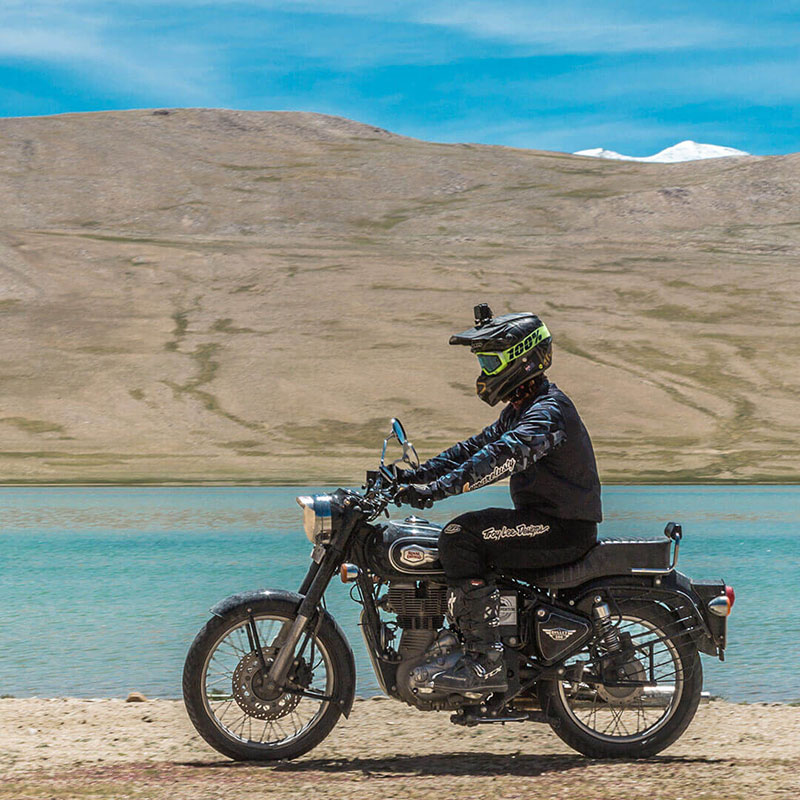 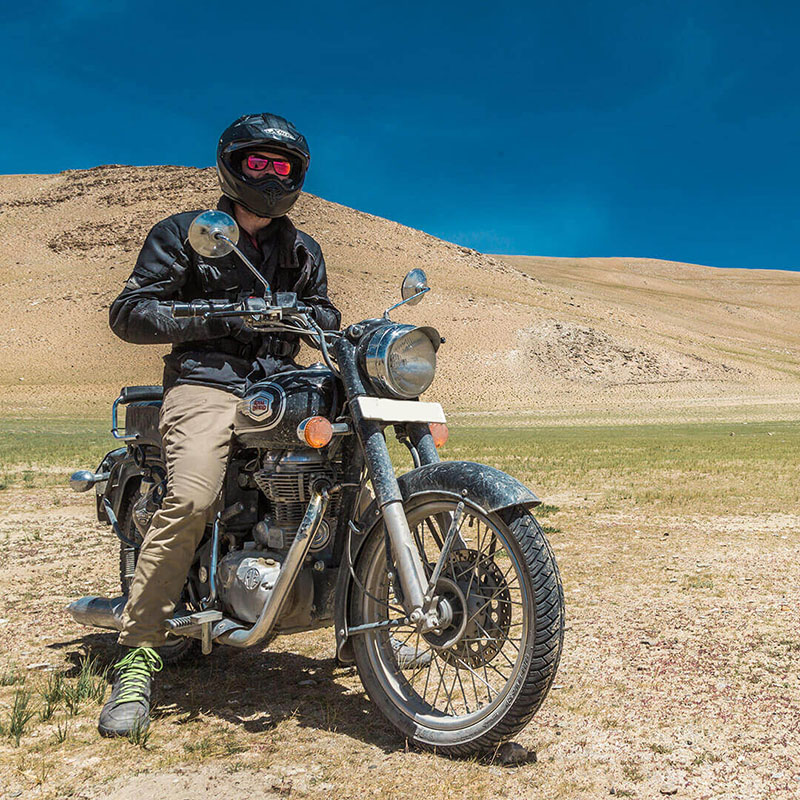 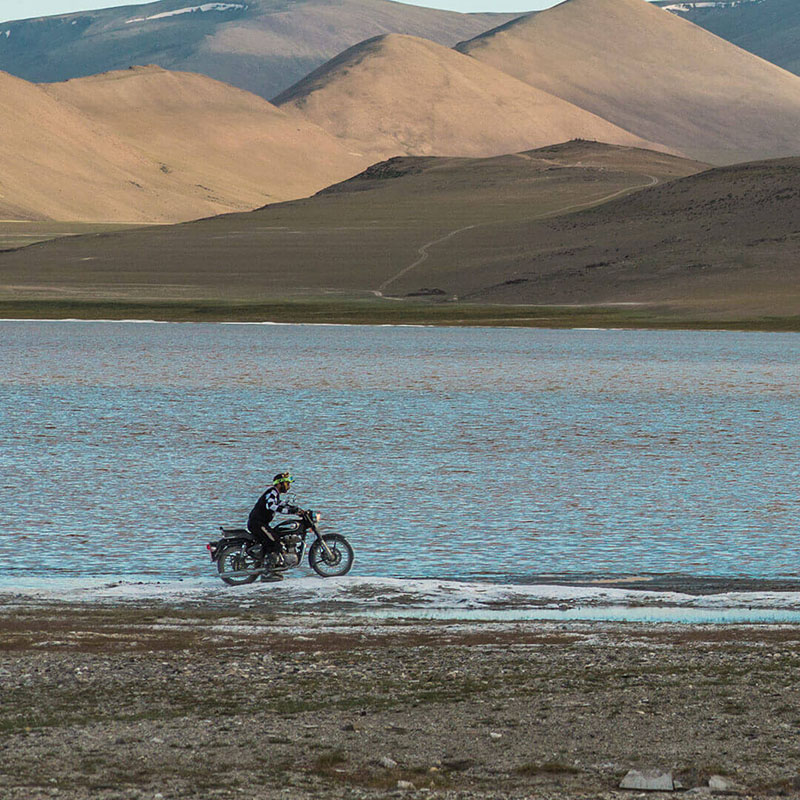 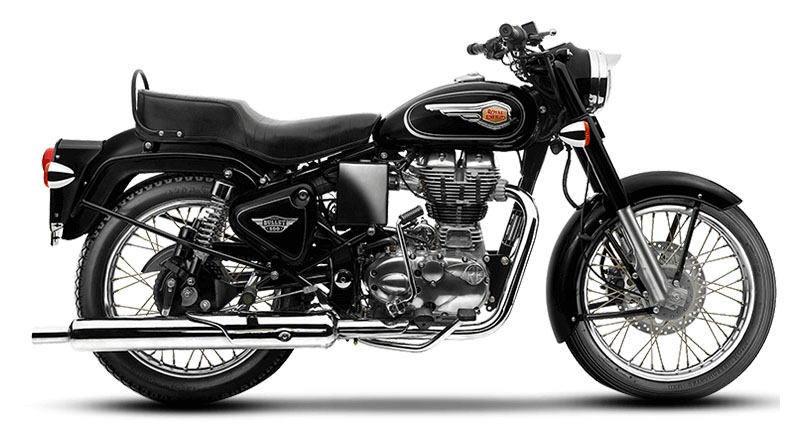 Authentic Styling From A Long-Ago Era
Royal Enfield brings old-school, British charm to the American market like no other builder in the world, and the Bullet 500 EFI is no exception. A genuinely dated design, not just another retro/tribute machine, it packs a 27-horsepower thumper in with all that antique appeal. Classic charm and a 499 cc fuel-injected engine make the Bullet a modern blast-from-the-past in the best possible way.

ROYAL ENFIELD BULLET 500 EFI DESIGN
The “Royal Enfield” marque started out in 1890 as a British manufacturer, and through time started assembling units in India before going defunct in 1970 back home in Mother England. Since then, the factory in India began to actually manufacture the parts to build the machines inherited from the Brits, and it has recently designed its first in-house engine and bike with its “Himalayan” model, but that’s a subject for another day.
While the Bullet name has been in play since 1931, the overall looks of the current model seems to channel the ’50s or ’60s with its overall panache. This starts bright and early with a strut front fender over a good, old-fashioned laced rim. Really, it’s only the hydraulic brake disc that gives it away as a modern machine in this area. Rwu front forks come with monochrome fork covers that cover the inner-fork tube in its entirety from the fork cap down past the top of the sliders. A monochrome headlight can sits nestled in the tripletree with a chrome bezel and visor to dress it up, and that bit of bling ties in nicely with the bullet turn-signal housings.
Moving aft, we come to the very dated-looking, 3.83-gallon fuel tank complete with badging and pinstripes. A two-up seat gives the Bullet a more modern look than it would have with the sprung solo seat used on other models, and it comes with a blackout oh-shit handle so the passenger has something to hang on to other than the pilot, or maybe as a hardpoint to which you can strap a jacket or some other light cargo.
Matching chrome-bullet housings contain the rear turn signals with a huge, decidedly uncool-looking blackout tail light housing to finish out the lights on the rear fender. Yeah, not a fan of that detail, but it’s definitely not a deal breaker by any means. Like the fuel tank, the triangular side covers come badged and striped for more classic appeal and some continuity of design to tie everything together. Naturally, the engine just finishes the look with a final dose of British-ness to close the deal.

Steel tubing makes up the single-downtube frame, and the assembly relies on the engine as a stressed member to complete the assembly while lightening things up to make the 412-pound curb weight. The factory doesn’t mess around with any kind of cutesy setup at the swingarm, but instead runs a twin-side, tubular yoke to articulate the rear wheel with a pair of coil-over shocks to support the rear of the bike and dampen the motion. Beyond the adjustable preload in back, the suspension components are pure vanilla, and ride quality is about what you would expect; sufficient at best. Suspension travel clocks in at 5.11-inches up front with 3.14 inches of travel at the axle in back.
A 280 mm front disc and twin-pot caliper slows the front wheel, but the rear wheel comes with a quaint little 153 mm drum for middling stopping power. The saddle rides at 32.5 inches off the ground — tiptoe country for shorter riders — and a set of 19-inch hoops finish off the rolling chassis. Overall, the bones give us a compact, 54-inch wheelbase with five inches of ground clearance.

ROYAL ENFIELD BULLET 500 EFI DRIVETRAIN
Even more charming than the looks of the rest of the bike is the little gem of an engine. It carries that British charm in spades, and reminds me very much of the mid-century plants we saw from other Brit manufacturers. The air-cooled thumper comes laid out in a longstroke configuration with an 84 mm bore and 90 mm stroke that gives it its 499 cc displacement. Compression is dead low at only 8.5-to-1, so you can probably get away with the cheap pump gas without suffering any pre-ignition/detonation/dieseling, which is a rare thing on modern street bikes.
As dated as the engine itself may be, it isn’t all stone-age stuff, not quite anyway. The mill utilizes a Keihin electronic fuel injection system to meter the induction, no doubt to help it meet ever-increasing emissions standards and bring performance up a bit. Indeed, it does seem to make the engine behave a bit better than the old carbureted models with slightly faster acceleration, but it still takes a leisurely 12-seconds or so to spool up to 60 mph from a standing start.
And yeah, it’s a thumper, so vibration is definitely outside most people’s comfort zone at highway speeds, but it is tolerable nearer the bottom-end of the spectrum. Grunt output maxes out at four grand with 30 pounds of grunt and 27 ponies that come on fully at 5,250 rpm, but that doesn’t tell the whole story; the mill is so torquey, it has something to give if you roll on at any point in the bottom end, no need to wind it up till your teeth rattle. “A tractor” you say? Maybe, but some of us like riding tractors, after all.
A standard wet clutch couples engine power to the five-speed transmission that comes with a kick-starter to backup the electric one if you need an emergency start, or to just look cool whilst kicking the old girl into life. The 87 mph top speed means it is capable of keeping up with any and all legal traffic, but not without a few issues. Of course, that top speed is in dispute. Dealers say 70 is the top speed, but owners report no more than 75 mph downhill with a good tailwind. I have, however, seen video evidence of 83 mph according to the speedometer, which can be up to 10 percent off that high on the dial. Take it for what it’s worth. Ride before you buy and see if it goes fast enough for you.